If we talk about the priorities of WHO food safety is in the top 11, this organization making astronomical efforts in this aspect. Due to foodborne illness in the world, life is affected by many out brakes; Children are mostly affected by this issue in developed and Under-developed countries. If we want to overcome the issues of Poverty and Hunger in the region, then we have to improve the food safety conditions. Many of the common diseases like kidney issues including salmonella, listeria, campylobacter, or E-coli. Tuberculosis is transfer through animals and people belonging to villages are mostly affecting by this issue. Millions of peoples are affected by intestinal problems which are caused by water contamination. Foodborne diseases are account for a major challenge for developing societies. According to an estimate, there are around 15,00 diarrheal affairs befall worldwide, out of which 75% is due to biological defilement & aftereffect in 3 million deaths of children ranging from age 5 or less. 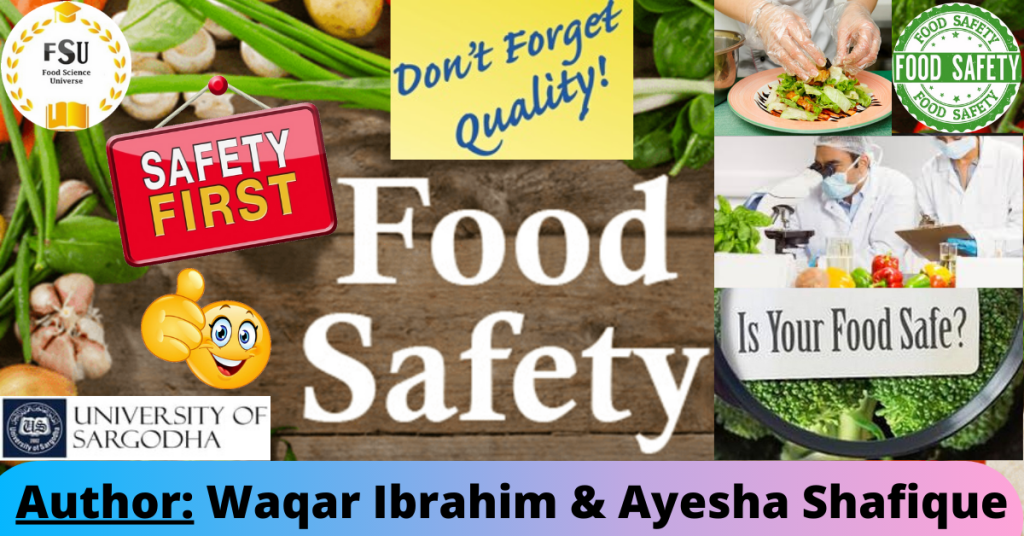 Everyone has concerned with food safety for its health. Food consumption is basic for survivorship of life, food safety problems are bosom for all of us. If we talk in simple words, the things we chew or drink should be free from contamination, safe for humans. If we want to deliver safe food for the people living in the region, we have to take steps to increase the level of food chain i.e. production techniques, storage conditions, supply techniques, transports facilities and consumption. If we see, the government and citizens are the two main investors to ensure food safety in the country. Food producers/industrialists play a major role in food safety, but we will not discuss this in this article.

The focus of the article is the role of government and the citizens of the country to achieve the food safety levels by enforcement or by proper legislation, the reason for the implementation is to authorize the state, the citizen has to play a major role in the implementation of legislative sachem offered by the government. The state provides the legal configuration, include several conditions for providing safe food to the people. These include banning the sale of adulterated products, biosafety measures by keeping different Sops and etc. Every country has its own framework to ensure food safety, according to their religion and believe. If we talk about Pakistan, there is no infrastructure but we have a set of laws according to Islam, to ensure food safety in the country. If the government had played its role to implement these laws a long time ago then we have solved many of the problems about food safety. But like other laws, food safety laws are very down for implementation.

There are four laws in Pakistan that particularly bargain with food safety. Three of these laws have a direct relation with issues affiliated to food safety, while 4th law is named as Pakistan Standards & Quality Control Authority Act (PSQCA), but is indirectly related to food hygiene. A short review of these laws is given ahead:

This law was passed in 1960, this law deal with hygiene production or preparation of food product & the sale of these food products. All the provinces In Pakistan and some areas in Northern sides adopted this law by making some corrections in it. The main purpose of this law is to make sure that the purity of food is being delivered to the citizen in the market, by preventing the addition of adulterants. The law forbids any person to add or mix color, stain or powder in any food product. If the addition of these is more than the limit set by the rules, so it’s likely to make food products injurious for human health.

The food safety laws in Pakistan have standard limits for coloring component, preservative use while processing, flavoring compound, antioxidants, stabilizers, anticaking agent, non-nutritive components and metals. This law also bans the selling, preparation, production, import, and export of such food products which are adulterated beyond the limits and it is also harmful for consumption. This law has also standards for the packaging of food product and caution measures are taken during storage and packaging. There are four attributes which should be followed to ensure the purity of the food product:

1) It bans the production of such food products which are harmful to the human intake e.g. product that can cause food poisoning.

2) It forbids the import and export or selling of hazardous food products.

4) It facilitates the laboratory analysis of the food samples which cohere to set criterion. It is the responsibility of the government to implement the law. The laws about food safety vary from area to area and the Panelist also has different criteria according to that area.

2) The pure food ordinance 1960, bans the production, preparation or storage for the purpose of sale for such products that are unfit for consumption. It is the foremost responsibility of the citizens to look around them and inform the local authority about the person who is found of preparation and production of such products which are harmful to the potential users.

3) Any person running a hotel, restaurant, sweetmeat shop or any other eating place should have a health certificate from the health officer of the area. It should be mentioned in the certificate that he/she is selling food safe for consumption. A person can ask for the certificate, in case of failure he/she can write a complaint to the health inspector of the area.

In Pakistan, departments are working for the testing of water and other components which are used for the preparation of products in industry or home. For instance, National Institute of Health (NIH) & Pakistan Council for Research in Water Resources (PCRWR), these departments have conducted laboratories test for bottled water brands, many times and they found many brands inappropriate for the consumption but they never leaked out the information about these brands as it is illegal in accordance to the law.

Different types of tests are performed on comestible oil and Banaspatti ghee by Pakistan Standards and Quality Control Authority (PSQCA) being prepared in Karachi, but PSQCA never exposed the names of these brands which are unfit for consumption. Pakistan food imports are controlled by the Federal government and the measures to fulfill Food Safety Standards are insured by the Provincial governments.

In 2011, PFL of 1963 was revised and now, they are considering as basics for the trade-related food quality and the safety framework. Under this law, 9 apparent groups of food products are made which covers 104 food items. Following are the classes of these products:

Following are the departments having the responsibility to have a check and balance of the raw material being used in the production of food products:

In Pakistan, under the government of Punjab, an agency named as Punjab Food Authority (PFA) is running to facilitate the citizens of Punjab with hygiene food products & to aware the people about the awareness of food safety & its importance. It was founded in 2011. It was the first department of its type in our country. Two acts were passed in 2011, named “Punjab Food Authority Act 2011” & “Pure Food Rules 2011” to enforce the rules for Quality standards as described in the laws.

Following are the responsibilities which are fulfilled by the PFA in accordance with the Act 2011;

1) They have to monitor the activities of different industries dealing with food product manufacturing, to ensure the supply of safe food for the consumers.

2) They have to maintain standards & create new rules & standards for different types of food products & also for food additives & packaging.

3) They have to maintain the standards of their Testing Laboratories & have to Upgrade their Procedures & Equipment according to new rules & technology.

4) They play an important role in organizing the training sessions for the citizens & stakeholders.

5) To trace the production lines of different food products & hygiene measures of the industry.

Different types of methods are used by PFA to enforce the standards discussed in the PFA act of 2011.
Following are the methods;

1) Sending Notice to the Stakeholder.
2) By Fining the Industry.
3) Seize a specific product or the whole industry.
4) Recall in the food product light of Laws.

According to the PFA act 2011, a Food or Food Product will be adulterated if;

1) Which is not Natural.
2) The substance that effects the Environment & Health of Consumer.
3) Which is not Processed according to standards & have additives beyond the standard limits.
4) Any product that contains Poisonous components.
5) Which is kept in unhygienic conditions.

According to the recent conditions of food safety in Pakistan, it’s a big challenge for the economy of the country to overcome these conditions. To save a country from the worst conditions, it is necessary to take safety measures on time. Foodborne diseases are the alarming conditions for the country among which diarrhea is most common in the children, we have to overcome this issue because our future is based on our children. The improvement of farm hygiene will also contribute to food safety major concern of food quality. Food is one of the basic necessities of humans.

The number of variety of scientific techniques has been developed to protect consumers and also to screen adulteration in food. Advanced tools and research efforts should continue to be applied to address all food quality and to ensure brand and consumer protection. Food integrity includes primary production, storage, processing, packaging, distribution, retail, product consumption to recognize or analyze unwanted food ingredients in the food supply line that would impact public health and food safety. moreover, to control contamination minimize the risk of unfit consumption of food. The best way to stay healthy well informed about the basic principle of food handling and safe food production.